This page has been automatically translated from Latvian into English by Hugo.lv. Machine translation allows to understand the meaning of a source text, but cannot substitute a human created translation made by professional human translators.
Making Patterned, Double-Knit Mittens in Mazsalaca (2020)
In Mazsalaca, a double-knit mitten is one that has patterns both on the inside and the outside with the colours reversed 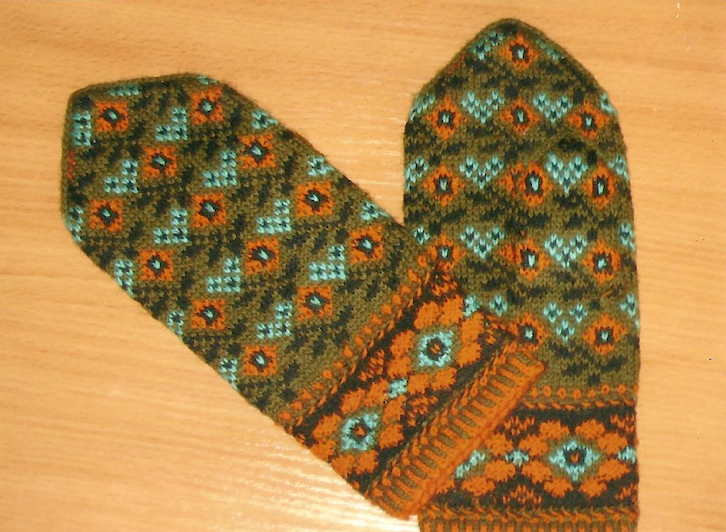 Link
Watch the video
To the Inventory of ICH

Also known as "dubultnieki" [double ones].

The tradition is sustained and safeguarded by the Folk Arts Studio Mazsalaca.

Description of the element

Also known as "dubultnieki" [double ones].

The tradition is sustained and safeguarded by the Folk Arts Studio Mazsalaca.

The skills needed to make patterned, double-knit mittens represents many years of diligent work for the Folk Arts Studio Mazsalaca, and these are their hallmark of intangible cultural heritage and identity. The double-knit mittens of Mazsalaca are doubly warm and doubly beautiful. This fifty-year creative journey has been sustained and nurtured by the joint efforts of the studio and the support of the Municipality.

In Mazsalaca a double-knit mitten is one that has patterns both on the inside and the outside with the colours reversed. The knitting of these patterned double-knit mittens originated with Folk Art Master Rasma Āboltiņa.
Rasma Aboltiņa joined the Folk Art Studio Mazsalaca In 1982, soon after moving to Mazsalaca with her family.
This is how the double knitting of mittens began in Mazsalaca; mittens like this were not being made anywhere else. Rasma was followed in this work by Folk Art Master Ilga Vītola, who also learned to make double-knit mittens.
Late in 1986, Rasma Āboltiņa was awarded the title of Folk Art Master. In the intervening thirty years, she has participated in countless exhibitions and annual fairs at The Ethnographic Open-Air Museum of Latvia.
A masterclass in Safeguarding Mitten Knitting Traditions was held in the summer of 2009, with the work continuing in 2010, at the 3x3 Camp. Āboltiņa also participated in the Traditional Skills School and the Meet Your Master Artisan events presented by the Latvian National Centre for Culture.
In her free time, Āboltiņa taught double-knit mitten making to interested groups in the neighbouring municipalities of Valmiera, Smiltene, Ogre, Staicele, as well as at the Craft House in Cēsis, and closer to home in Ramata, Sēļi, and elsewhere.
In 2014, the Latvian National Centre for Culture published a guide to the "Double Mittens of the Folk Art Craftsman Rasma Aboltina".
Late in 2015, Latvian Television recorded an interview with Rasma Āboltiņa about the making of double-knit mittens.
Rasma Āboltiņa passed away in April 2019.
Although many have learned to make double-knit mittens, information about the number of skilled individuals and active practitioners is not available.
In Mazsalaca, Āboltiņa was succeeded by Evija Nagle who continues to teach other knitters. At the studio, skills are put into use by Folk Art Masters Ilga Vītola, Sarmīte Luste, Ilzīte Celmiņa, Māra Mistre, and to a lesser extent by Rita Ertmane and Gunta Jēkabsone.

It is possible to acquire these skills at the Mazsalaca Craft House of the Folk Art Studio from artisans individually, as well as from the guidebook "Double Mittens of the Folk Art Craftsman Rasma Aboltina" (Latvian National Centre for Culture: Rīga, 2014, with the support of the Council of Mazsalaca Municipality).
At the present time:
1. We provide ongoing instruction, access to information free of charge, and weekly extra-curricular classes for youth at the Mazsalaca Craft House.
2. Masterclasses and thematic exhibitions are presented twice each year.
3. Master artisans participate in state and regional exhibitions. In the last three years, this has included:
In 2017, the Leading Theme: Black and White exhibit organized by the Latvian Folk Art Union.
In 2018, the Applied Art Exhibition at the XXVI Latvian Song and XVI Dance Festival organized by the Latvian National Centre for Culture at the Rīga Art Space;
The Arts and Crafts Exhibition Leading Theme: Festivities organized by the Latvian Folk Art Union.
In 2019 and 2020, the Latvian Arts and Crafts exhibitions "Birds in Colour and Composition" and "Flowers in Colour and Composition" at the Mēru Manor Museum in Smiltene, organized by the Smiltene Municipality and the Folk Art Studio Smiltene.

Seminars and summer camps are being planned for the long term with the support of Mazsalaca Municipality and Cultural Centre, the Latvian National Centre for Culture, and the State Culture Capital Foundation.

Archaeological findings attest to the presence of mitten-wearing traditions in Latvia since the fourteenth and fifteenth centuries.
The mittens in Latvia’s museums date from the eighteenth and nineteenth centuries.
Mittens are both an accessory and a necessity and can be divided into three groups: work mittens, festive mittens, and gift mittens. Today this division remains unchanged although possibilities have expanded tremendously. Like any other skill, mitten knitting was originally learned in family settings and inherited from parents and grandparents. Neighbours learned from each other, all the while maintaining identification with their parish or county.
However, the tumultuous twentieth century brought change and unrest. Social structures changed, wars and economic crises took place. Industry developed and there was progress in education, science and culture. Craft persisted in times both bad and good.
Latvia experienced a very active cultural life after World War II. Weaving and handicraft groups and studios were set up by clubs and culture houses.
The Folk Art Studio Mazsalaca will celebrate its fiftieth anniversary in 2022. The weaving and handicraft club was founded in 1972, and in 1982, awarded the honourary title of Folk Art Studio Mazsalaca.
It was in this year that Rasma Āboltiņa began to attend, bringing her knitting skills and innovations. Her invention came into being along with a story about a vest.
How did it all begin? The story according to Rasma Āboltiņa was that while she was working in bookkeeping at Austrumi, a young man wearing a patterned, knitted vest came into the office. When the vest opened, she could see that there was a pattern on the reverse side as well, not the usual strands of yarn. Rasma asked the man who had made the vest and he said that it was his mother but not to ask how she did it. Rasma asked him to take off the vest, and she studied it closely to understand the technique.
Every one of Rasma Āboltiņa’s pairs of mittens was a work of mastery. The world was slower then, money was scarce, material even scarcer, but there was plenty of optimism, imagination, and creativity. Members of the Mazsalaca studio knitted mittens and socks, wove blankets, table cloths, towels, participated in many exhibitions and travelled to The Open-Air Museum’s annual fair every year. These were true celebrations of craft!
The 1990s were one of the most difficult periods for the people, as well as for folk art and culture, their collectives and leaders. People left the country in search of work and the collectives grew old.
Early in the twenty-first century, new growth became discernable as a wider selection of materials and more information became more available. New designs and kitsch dominated.
Sunnier days came for artisans, but the climate encouraged us to think practically, warmly, and beautifully. How much thought and time, how many patterns were knitted into these mittens? What could they signify to the person who wore them?

Countless masterclasses, summer camps, seminars, and training trips have taken place in the last twenty years in Vidzeme and elsewhere.
Today the Meet Your Master Artisan project is particularly relevant, as are masterclasses and participation in applied art exhibitions.


Mazsalaca is a weaving town with its own history and stories. You can’t put a loom into your purse, but you can always find a place for your knitting in your bed, by the television, on a kitchen window ledge or out in the garden. You have to knit for your family and make gifts for your friends and relatives. It seems as if the women of Mazsalaca were born with the ability to knit. Everyone has their little secrets, but double-knit mittens are our common heritage.
Rasma Āboltiņa’s knitting technique is now our studio’s trademark and several members are well versed in it. This is a source of pride, but it also carries a responsibility not to give up and act to ensure it lives on.
Double knitting is as time consuming as any other handicraft. Every mitten has its own story. Warmer winters are also having a certain effect since people wear mittens less frequently. Despite climate change, northern Vidzeme has not relocated; the climate here is harsher and mittens are still necessary, so there is still a demand for them.
Rasma Āboltiņa’s legacy encourages the knitters of Mazsalaca to continue planning and thinking about launching a Latvia-wide project to develop and consolidate double-knit mitten skills.
The intangible cultural heritage inherited by the studio and the city from this Master knitter has brought joy and pride, as well as a sense of responsibility to develop and continue what she started.

Other useful items can be made by extending this technique, including accessories such as scarves, shawls, hats, socks, as well as textiles for the home such as bedspreads.

This activity has left its mark on the people of Mazsalaca.
The important Meet Your Master Artisan project organized by the Latvian National Centre for Culture and the municipalities nurtures an interest in craft skills, encourages the desire to participate and learn these skills improving our quality of life. It is open to anyone who is interested regardless of their social class.
A new development in the last two years is the interest in craft among city people who have bought summer homes in the countryside or in small towns.
1. Promoting extra-curricular education for youth, participation in workshops, attending exhibitions and writing evaluations of what has been seen.
2. Seminars promote the acquisition of professional skills, professional development, and the exchange of experience.
3. By participating and attending exhibitions you are receiving information on an ongoing basis and always analyzing your assessments. It is also advertising. You can see a variety of work in one place; you can compare them, assess them, criticize them, and copy them.
4. Recognition and popularity increase. Like-minded people are encountered.
5. Instruction continues at the Mazsalaca Craft House on an ongoing basis and access to information is free of charge.


The Municipality provides €4,500 to support the work of the studio. This amount covers salaries, the costs of upkeep, heating, and utilities.
The Latvian National Centre for Culture grant is on average €400 per year which is used to supplement the director’s salary.
We plan on using €2,000 for seminars making use of matching funds from the above institutions.

Measures planned to promote visibility of this element:
1. A second volume of the handbook "Double Mittens of the Folk Art Craftsman Rasma Aboltina" is in preparation.
2. Work will continue in 2021 and 2022 on researching and developing teaching resources.
3. A repository for completed items will be developed in 2023.
4. Technical drawings will be developed in 2023 and 2024.
5. Instructional material will be published and presented in 2024–2025.

For the protection and preservation of the action plans, see “text materials”.

The goals of the planned measures are:
1. To promote the making of patterned double-knit mittens, facilitate skills acquisition in Vidzeme and Latvia, and honour the contributions of Folk Art Master Rasma Āboltiņa.
2. To seek collaborative models that would result in patterned double-knit mittens becoming a trademark of Mazsalaca and their makers a source of local pride.

Threats to the Tradition

Potential threats to double-knit mitten-making skills:
1. Aging of the practitioners and little increase in the number of knitters;
2. Climate change could decrease the demand for warm mittens. 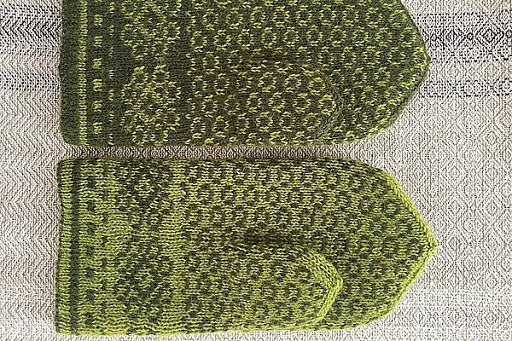 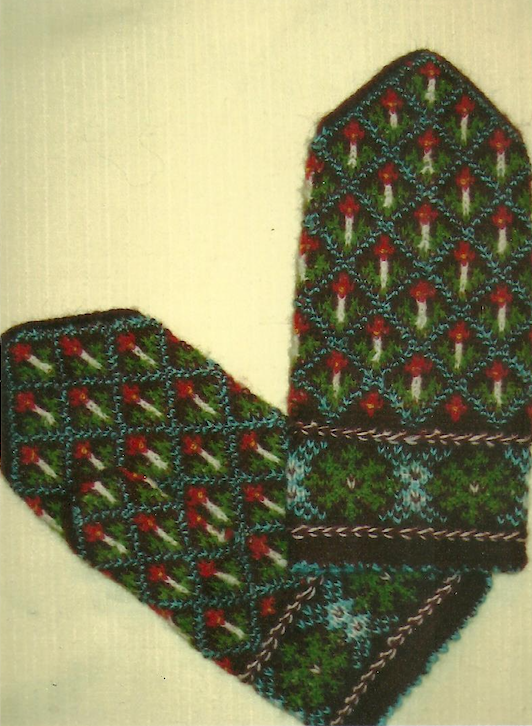 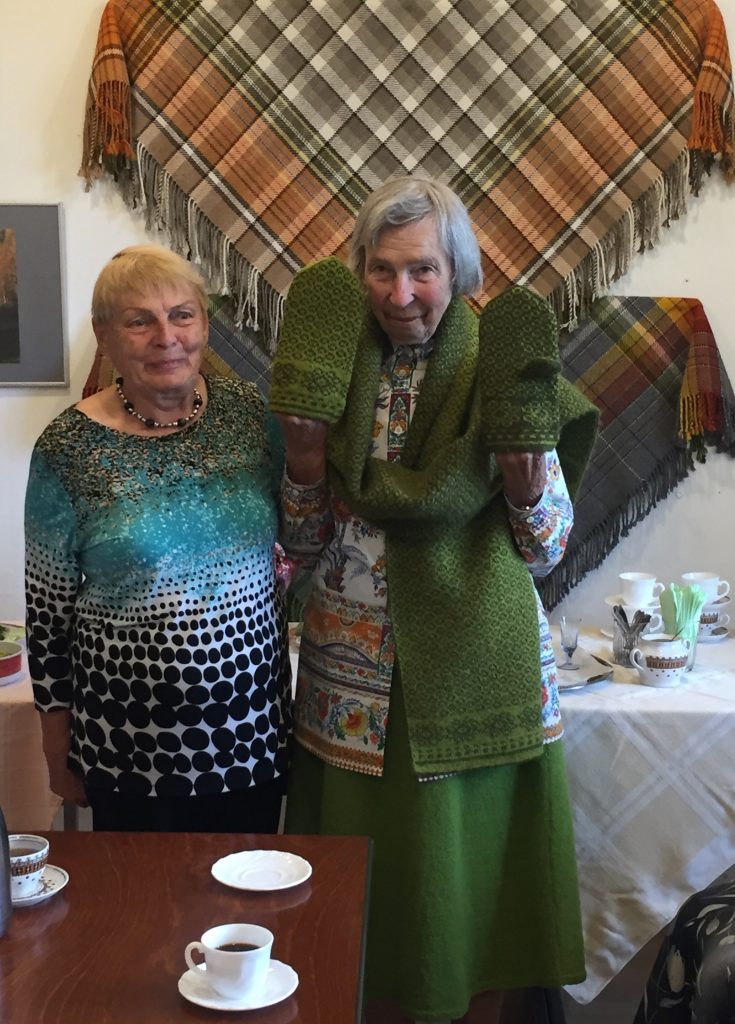 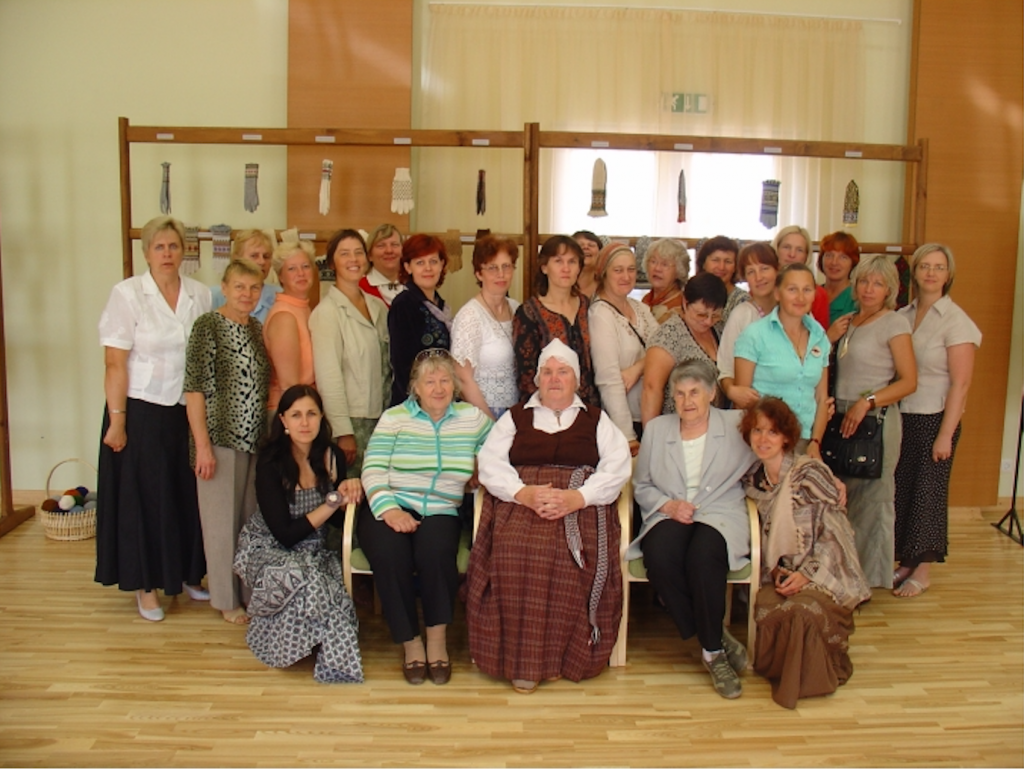 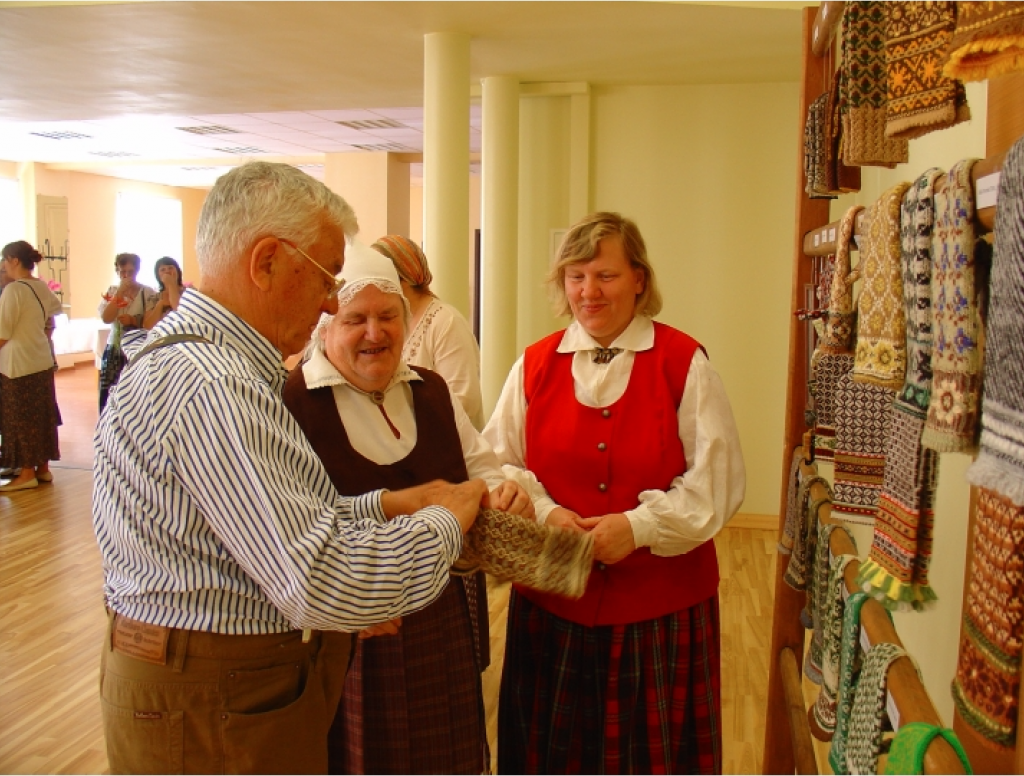 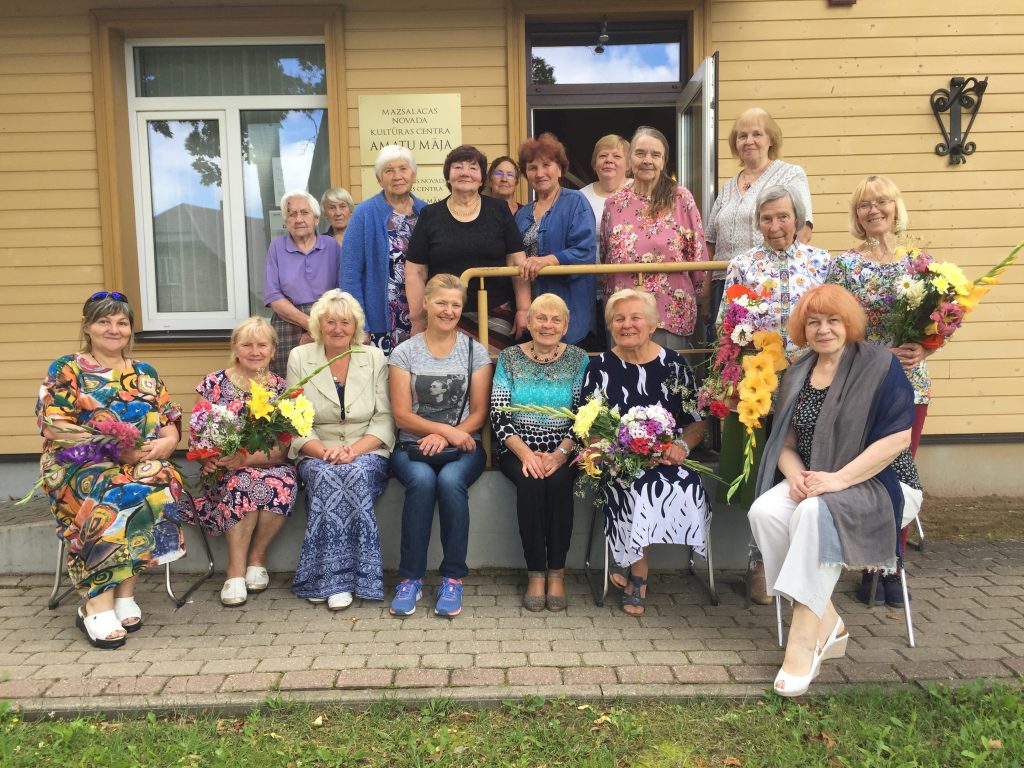 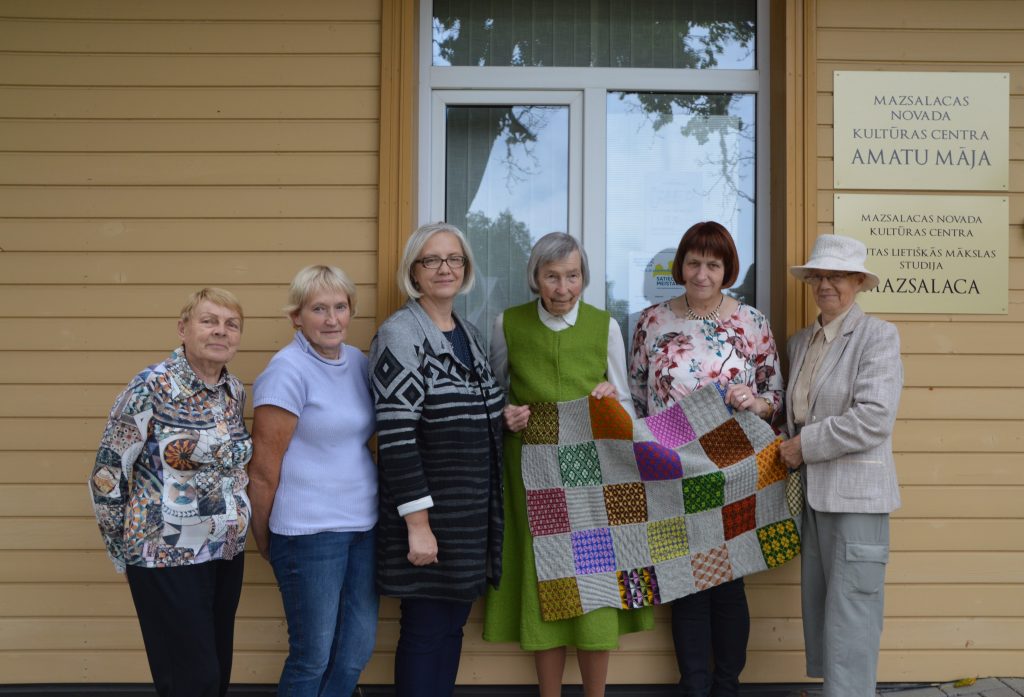 Plan for the Safeguarding and Development of the Element

The article “White came to the people of the people”, the newspaper “Riga Voice”, February 1990